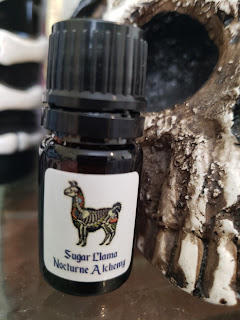 Good afternoon, y'all! Yesterday was a jam packed busy Sunday, so I wound up skipping out on getting this posted, but I'm back with a mini-review of Nocturne Alchemy's Sugar Llama, from the Sugar Animals sub-collection. These were all created to be stand alone perfumes, as well as layering perfumes, for anything you might want to add a sugar note to. I had initially bypassed Sugar Llama but when I started thinking about the layering possibilities it wound up being the first Sugar Animal I purchased!

Notes are:  Sugar, Rice Milk, Bastet’s Ice Cream, Crystalline, Bourbon Vanille, Tonka Bean, Black Vanilla and French Vanilla. So yeah, this one is pretty straightforward. I've worn this a few times as a stand alone perfume, and it's lovely - a soft, slightly milky vanilla with a nice, crusty sugar aspect. I just adore NA's sugar notes. It's amazing how I can sniff my wrist and get the impression that there's a crunchiness to the sugar! To me, this is like if two of my favorite Summer Tea Service scents were blended together - Sugarcube, my all time favorite, and Rice Milk, which isn't far behind. I don't get much of the Bastet's Ice Cream, just a slight warmth, I think, but I do sense the Bourbon Vanille, although it's not prominent on me. There's just the slightest kick of milky vanilla liquor here. It's a pretty light, sparkly, clear vanilla and sugar scent that leaves a milky sort of soft musk over the long drydown. Sugar Llama is the softest perfume in my order, but that's okay - as I mentioned earlier, I bought it because I just knew it would have endless layering possibilities. One of the first things I tried was layering it with other Tea Service scents - Sugarcube, Rice Milk, and Apricot Sugar, and it just amplifies those beautifully. I've done a lot of layering experiments with this, and it literally goes well with everything I have tried. Today I'm wearing it with Santalum and Hessonite (now called Patchouli). It's so cozy! Here are some others I've tried: Torosaurus, Raguel, Myrrh Ombré, Bastet's Amber Dark Wood, Burning Jack Ascended, Le Macabre, Vanilla Copal. Really, with this the sky is the limit!

So I'm definitely going back for the other two Sugar Animals I was looking at, Sugar Penguin and Sugar Owl. Have y'all picked up any of these? Tried layering them?