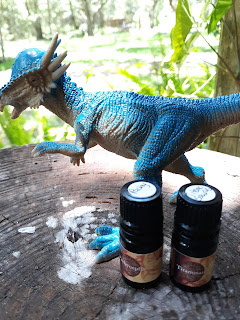 Long time no write, eh? Didn't even get around to finishing my favorites from 2019, but to be fair, we got sick here and then everything went a bit wonky! So I'm back today because I realized I hadn't written about my two Dinos I got from last summer's Limited Collection by NA, Titanosaurus and Pachycephalosaurus. I call her Pachy for short, so that's what you'll see in the rest of the post. I couldn't believe I actually found a Pachy in the store for this little photoshoot!
So let's just jump to it.
Titanosaurus - Resinous Amber Accord, Limestone Amber, Cinder Vanilla (releasing in the Fall SL Originals a Studio smoked wood and vanilla bean perfume elixir), Nag Champa essence, Smoke accord, Australian Sandalwood, Tibetan Crystalline. This is just the perfect smoky vanilla. Honestly I have worn this alone many times, I love the combination of smooth sandalwood and bright amber with the Cinder Vanilla! There's a little tang at the back, it almost feels like a spice? but not. I feel like it is probably the only hint I really get of the two nag champa components on my skin when I wear it alone. It's just beautifully rich and a little sexy. So intriguing. I am hoping I can go back in and grab a backup of it, along with a backup of Eternal Egypt Summer and possibly Pachy, but there were other bottles on my list that I missed last year, so I concentrated on those first. The smoke is not acrid in this, rather it's smooth and wraps itself beautifully around the rest of the components. At first it almost has a bit of a campfire smoke at first - in the most beautiful way, of course, but then everything sort of melds together and it just adds the perfect warm smoked wood to this. By the way, from what I can tell from Titanosaurus, Cinder Vanilla is vastly different from their Ember Vanilla. Both are lovely, but if you were worried about that you could safely have both without remotely thinking they were dupes. Okay, so if you have read my other reviews of the Prehistoria perfumes I have, you will know that these beauties really shine when they are layered, or "hatched" with other perfumes. (Dinosaurs are hatched from eggs, y'dig?) So here are a few different layering options: If you want to play up the sandalwood, I have worn this with Pteranodon, Halloween 2020 (WOW), Santalum, and Santal Ombre (WOW). All of these are lovely choices. I have also paired it with other Dinos - Dimetrodon, Pachy, Protoceratops. I wore it with Camarasaurus one day and that was a stunner!  To play up the nag champa, I paired it with Tibetan Crystalline, and that was heady and a stunner. I will definitely be doing that again. Also wore it with Mummy Tomb Incense and it was like they were made for each other. You might try it with one of the Nag Champa Seahorses, I'm thinking all three would work but definitely the original and the sandalwood one - and that note that was teasing me at the back of the blend when I wore Titanosaurus alone? It wasn't spicy, it was incense-y. Definitely pulled out more of the nag champa! Also any vanillas - Bastet's Ice Cream Original, Ember Vanilla (WOW), Crystal, Crystalline, Crystalline Dark was really good too! I found Titanosaurus to be very versatile and paired well with absolutely everything I tried it with. Stuff I haven't done but really want to try: Pumpkin Number 29, with the nag champa, Sweet Santalum Milk, Egyptian Temple Oudh, Sandalwood Copal, Sandalwood Musk.
Pachycephalosaurus - Resinous Amber Accord, Limestone Amber, Bastet’s Ice Cream Accord, Crystalline Resin, Pink Pepper, Blue Sugar. Shoooo, I love Pachy so much. It's lovely to wear alone, and I've done that many times, but it's such an easy Dino to layer!  The vanillas are so warm and melty, but this is reeled in from being really foodie because of the ambers and that pepper. Hoooo the pepper. It gives it this little kick that turns Pachy into straight up sexy! It's just so...appealing. I find myself huffing my wrist with this one frequently. The sugar adds just a little...crunchy sweetness, nothing over the top but very appealing. I wanted to see how this could be played up a bit, so I paired it with Sugarcube and I highly recommend it. I think that Pachy is a vanilla blend that could appeal to foodies and non-foodies alike, and because of the infinite layering possibilities, it has a universal appeal. I have paired it with Music to play up that pepper a bit, and that was really one of my favorites. It works seamlessly with vanillas like Ember Vanilla, Bastet's Ice Cream Original, Protoceratops, Crystal, Spooktacular, Vanilla Musk. Try it with Polichenelle, Witch Fog, Eternal Egypt, Pumpkin Number 12 - the list is truly endless. Vanilla Copal, Holiday Egyptian Vanilla and Sandalwood, Phantasm Kiss, Copal Oudh...Hessonite (now known as Patchouli) is another stunner. I want to try it with Kashmir and Crimson, Crystalline/Santalum Deux, Hallowcats, Love of Bastet Pink Vanille, OP Pakhet - truly, I could try it with everything.
So yeah, y'all. I highly recommend not sleeping on either one of these if they remotely appeal to you. If you have them, what are your favorite layering combinations?
Posted by Niki Heilman at 3:22 PM