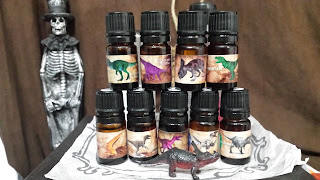 Hello, everyone! I've been wanting to write some reviews for a while now, but we moved, and then I promptly came down with a really bad case of bronchitis, that did not seem to want to go away. I ended up with two different antibiotics and almost went to the hospital at one point, but it's mostly dissipated finally. Well, then I had to put my house together and get everything situated here, and I'm sure anyone that has moved understands how much effort that takes. I haven't moved in over four years, and I felt really bad about not getting my house organized! And here I am, going on and on. Anyway, I had intentions of reviewing Seth's Dinosaur Collection for quite a while, but I think it's particularly relevant now. Nocturne Alchemy is reopening in 4 days, on June 30th! *squeeing and flailing* I'm so excited to see the site redesign. Also, they've been working on new label art, and from what I understand, they'll be adding new scents to the various Permanent Collections. So much fun. I'm sure it's going to be beautiful. If you'd like to keep up with them in the meantime, they have been posting fun things on their Facebook Business page, including a sneak peek video of the new logo, which is absolutely elegant.
Well, I started this last night, and ended up having things to do that needed my immediate intention - so I had to put it down and come back to it in the morning! It seems like that's the way things have been going lately, so now this review is even more timely. Before I delve into it, I want to make mention that I had an email conversation with the NAVA crew, because I wanted to address some of the rumors I'd seen going around since they'd been closed. I saw that folks were concerned that they wouldn't be reopening, because they've been gone so long, and I also saw that many were worried that the catalogue as it was known might not be returning, so I wrote to see if they'd give me something to share with people - and they did! Such lovely, kindhearted people, and that is the reason I am such a huge "fangirl". I mean, don't get me wrong - they make the most exquisite perfume oils, and of course that drew me in, but once I began to see how much heart they pour into their company, and how much they care about their customers, that really made me fall head over heels. Honestly, in the world of indie perfumes, NAVA is a pretty good sized company. They've been making perfumes for 10 years now - actually, as it's June, they're into their 11th year, and they have a pretty extensive catalogue! So in their own words, I'll use a direct quote here from Nocturne Alchemy.


NA will return June 30th. We asked our customers last year what they thought of the old NA site. Constructive criticism concluded that it was dated. The truth is, we knew this and had been looking for the right host site for the past two years. We knew it would take time to migrate and create a new site but we'd have to be 100% involved and the focus of a new site would mean we'd have to shut down the old site. In the process, we decided to recreate the art for the labels of the Permanent Collection (we call it the PC because we view perfume as you would at an art gallery, where there is a Permanent Collection and a Limited Collection or the temporary exhibit if you will). In the past six months we've taken some much needed time off after a decade of perfume making, perfume soul-searching, travel for more unique perfume, and also back in the Studio for months now working on new PC, new art for new labels and a new look for NA. It took two years prior to opening NA in 2006 creating a small collection of PC and Limited perfumes, designing labels, the site...the fact that we can do this in six months, means we are at the top of our game. We know what we want to create but you can't rush art. NA will return June 30th. Find us on Facebook to stay up with current information. The PC and Studio Limited will return, as well as the beloved VApothecary line that has been rebranded under Nocturne Alchemy to facilitate cohesiveness at the new site.

So, there you have it!  In addition to completely redesigning the site from the ground up, including a different type of "shopping cart", they've been working on all kinds of wonderful things. I am not sure I will even know where to start on Friday! I'm certainly looking forward to digging through the new site - bad pun intended? And now, I have to apologize. As I said, I'd meant to get this posted a few weeks ago, but life sort of threw me under the bus, and I just couldn't give it the proper time it deserved, as the Dinosaur collection, and the eNVie review, both deserve a bit more depth than just reviewing a single perfume. I'll be working on the latter today, to get it posted up hopefully by tomorrow.
So, roughly two summers ago, Nocturne Alchemy released the original Dinosaur collection, which was Seth's baby, as his other passion, from his early childhood, was dinosaurs, and he wanted to do a collection with that theme. I must tell you, it's been one of my very favorite collections, and I'm only missing a few of them. Last summer, they released a Resurgence, and added some new perfumes to the collection. It's alternatively been called the Prehistoric collection, but the name "Seth's Dinosaurs" has kind of become the popular name among the fans, and often gets shortened to "the Dinos". A little note about this collection: "These dinosaur perfumes are created with the beauty of resin in mind for each of them. The concept to this perfume, the label and the respect of the dinosaur is built on imagination. If you look at the label, there is an egg to the left. It is the same color as the Dinosaur. Apply the perfume on wrist and inner elbow and allow the scent to bind with your chemistry. Once this has occurred, inhale. This conceptually, is the egg. To allow the dinosaur to hatch, we wanted you to go to your Studio Limited Library and pull as many as you want, especially your favorites. The magic in layering the dino's with your Studio Limited Library will give your library a new NAVAlchemy aspect of layering and creating your own personal Dino scent. The fun in NAVAlchemy and hatching the dino eggs is all up to you!" - note from Seth. So, I've seen a few comments floating around the internet that say these oils seem to be rather linear, or flat - and I hope that people will read this, because if they don't realize that these were created specifically to be layered, then they'll miss the beauty of these. I do like them on their own, but I find that when they are layered with other perfumes, the beauty and versatility really shines through. I was never adventurous about layering until I was introduced to these beauties, and they really taught me to branch out, because the possibilities are quite endless. What's interesting is that a lot of the SL (Studio Line) is also fantastic for layering, so I'll make some suggestions for these together for you to try. I believe, from the hints that they've been dropping on the Facebook page, that we'll once again be graced with new Dinos this summer. I don't know if it will be happening with the grand reopening, or at some later time in the summer, but it seems that we'll be getting new Dinosaurs to play with! I cannot wait.

Editing to add a note, and a link to part two! I forgot to mention previously, is that these are lovely when you pair them together! And I've done this several times with different combinations. Pteranodon with Protoceratops or Deinonychus, Velociraptor with Utahraptor, Diplodocus with Giganotosaurus, Protoceratops with almost anything! Hah.
Another thing to mention, if you have eNVie Saphir, many of these are stunning when hatched with Saphir. Definitely worth experimenting with - I have Saphir, Ambre Saphir, and Encens Saphir, and they all do well with the Dinosaurs.